This is the first Victory Work to be created entirely after the decision to tokenize selected works was made. Once more, a hand-signed work on canvas forms the centerpiece of the object; one bearing the signatures of the football world championship finalist players of 2018, which is to say, the players of the French and Croatian national football teams.

All signatures were collected on location in Moscow, Russia, shortly before the tournament final in July 2018.

Work on the sculpture constructed around the signed canvas began in late 2021, with further work being done in early 2022.

The fact that completion of the work has been scheduled to take place immediately before the beginning of tokenization constitutes a creative decision. A strong desire to make use of cutting-edge technologies in the creation of his art has always been discernible in the work of David Pflugi. For the first time, this aspect of his artistic activities is able to find very direct expression in his work, influencing each of the myriad creative choices that are a necessary part of creating any work of art.

The use of trompe-l'œils and anamorphic illusions has been central to the artistic work of David Pflugi from a very early stage of his creative career. In its totality, his work is at least partially the result of a strong desire to show the limitations and shortcomings of the human sense of vision, and indeed cognition – in a manner that is critical, but not necessarily judgmental in attitude. David Pflugi challenges our conventional assumptions about the nature of things not in order to inspire a sense of weakness, but a sense of playfulness, and, having come to terms with the innate limitations of our own faculties, an almost childlike appetite for new discoveries.

Over the course of a quarter of a century, David Pflugi has perfected these techniques beyond what any other artist so far has achieved. «The Eternal Beginning» is a spectacular example of the results of this creative journey: This sculpture changes the totality of its appearance with every step taken by its viewers, not just through the use of anamorphic illusions and perspective distortion across a relief, but through the nature of its physical construction. The entire object takes on new silhouettes and visual identities, changing its entire nature in a rapid-fire sequence of unexpected visual experiences. Nothing can be taken for granted – everything is astonishing.

The relief itself is complex and intricate. Viewed along its length, it portrays human figures, facing the center of the object from either side – and therefore each other, suggesting social interaction. Their mouths are open, as if in intense conversation. There is no outright burst of activity, no animated pose suggesting any form of forcefulness or even violence. And yet, there is an undercurrent of tension in the situation, a hint of worry in their faces, an air of concern. Whatever the topic of conversation in these scenes may be, it appears to be a serious matter. Are they discussing their uncertainties, are they exchanging rumors? The artist leaves it to the imagination of the viewer to decide.

Further human silhouettes appear among the clearly defined characters in these scenes, but they are only hinted at – ghostly wisps that don't quite seem fully real, half-present and half-absent, some of them almost dissolving into shapes reminiscent of the simple flame one would find at the top of a candle. All this stands on a base featuring buildings reminiscent of those found within the relief of the earlier tokenized Victory Work «From the Ashes».

The painted features of «The Eternal Beginning» add a further dimension to this, contributing yet more layers of meaning to what is already a highly complex work of art. The two main sides of the sculpture are dedicated to different subjects, with one being reserved almost exclusively for the topic of football, and the other for more unrestricted artistic expression.

The football side shows a long path in a chessboard pattern, stretching out to the horizon of a flat landscape – a motif also occurring in the tokenized Victory Work «A Drop of Water». A young boy stands at the beginning of this path with a football under his arm, gazing at the long road ahead. The expression on his face is hidden: He is turned away from the viewer. There is a noticeable difference in visual style between the image of the boy and the rest of the object. This is because the design of the boy is a borrowing from a special edition of ruble bank notes, released in 2018. These notes have become sought-after collector's items; their image is widely recognized in Russia.

The relief forms the shape of a heart around this view. This heart is in the process of sinking into the skyline of the sculpted city beneath it, like a seed entering the soil – an image further supported by the presence of semi-abstract foliage in various places around the picture.

Only a few steps onward from this perspective are required for the heart to collapse first into a football, and then into a matryoshka of traditional Russian design. It stands atop a frame which holds the image of a white dove, seen in mid-flight before the backdrop of an envelope-shaped window, sealed with a small heart.

Moving on from this image, the matryoshka breaks up into the individual visual fragments from which it is composed. Some of these take on a new role in the subsequent view, forming the shawl worn by a woman who is holding her young daughter. This motif also collapses into visual fragments as one moves further along the sculpture's length, with parts of their bodies now forming the implied smaller figure of the father, standing between mother and daughter. At this point, one is facing the reverse of the object's football side, and the image becomes increasingly wild, almost chaotic, with the painting selectively emphasizing certain features of the relief. The young girl's face increasingly distorts with each step, taking on an eerie, almost alien quality. An inhuman figure arises at the far left side of this view, with water running off it in streams and droplets.

The untamed complexity of this view is then reduced rapidly to a surprisingly simple shape – that of a flame. It is after this view that one returns to the football side of the work, with the long chessboard path to the horizon and the young boy carrying a football returning gradually into view.

Like many of David Pflugi's works, «The Eternal Beginning» is partially painted using luminescent materials that change the object's colors and shapes when it is lit using only blacklight.

David Pflugi contrasts these complex and intricate scenes with the almost shockingly clean and simple outlines of the work's ever-changing silhouette: Here there is the heart, there the matryoshka, then the mother holding her young daughter – and the football resting on the ground, as if awaiting the kickoff. The air of tension seen within the details of the relief repeats itself within these simple motifs. Everybody and everything in the world of «The Eternal Beginning» appears to be waiting expectantly for some anticipated course of events to unfold. The football has not yet been kicked, the matryoshka not yet opened, the child not yet grown. The outcome seems, as of yet, uncertain.

But whatever those outcomes may turn out to be, there is an underlying hint at the cyclical nature of things. The matryoshka – a clear nod to Russia, the country that hosted the 2018 tournament – contains further matryoshkas, each generation giving rise to a new one. The child may herself grow up to become a mother. And as for the football: After the game is before the game («Nach dem Spiel ist vor dem Spiel»), as Sepp Herberger, the coach of the German world champions of 1954, once famously said.

What goes around, comes around – everything is finite, but beginnings are cyclical, almost eternal. So, too, is this work of art: Having concluded their journeys of discovery around it, its viewers will find themselves back where they started, and perhaps ready to make the journey again.

Time and time again, this work invites its viewers to make new discoveries — revealing new secrets with every step. 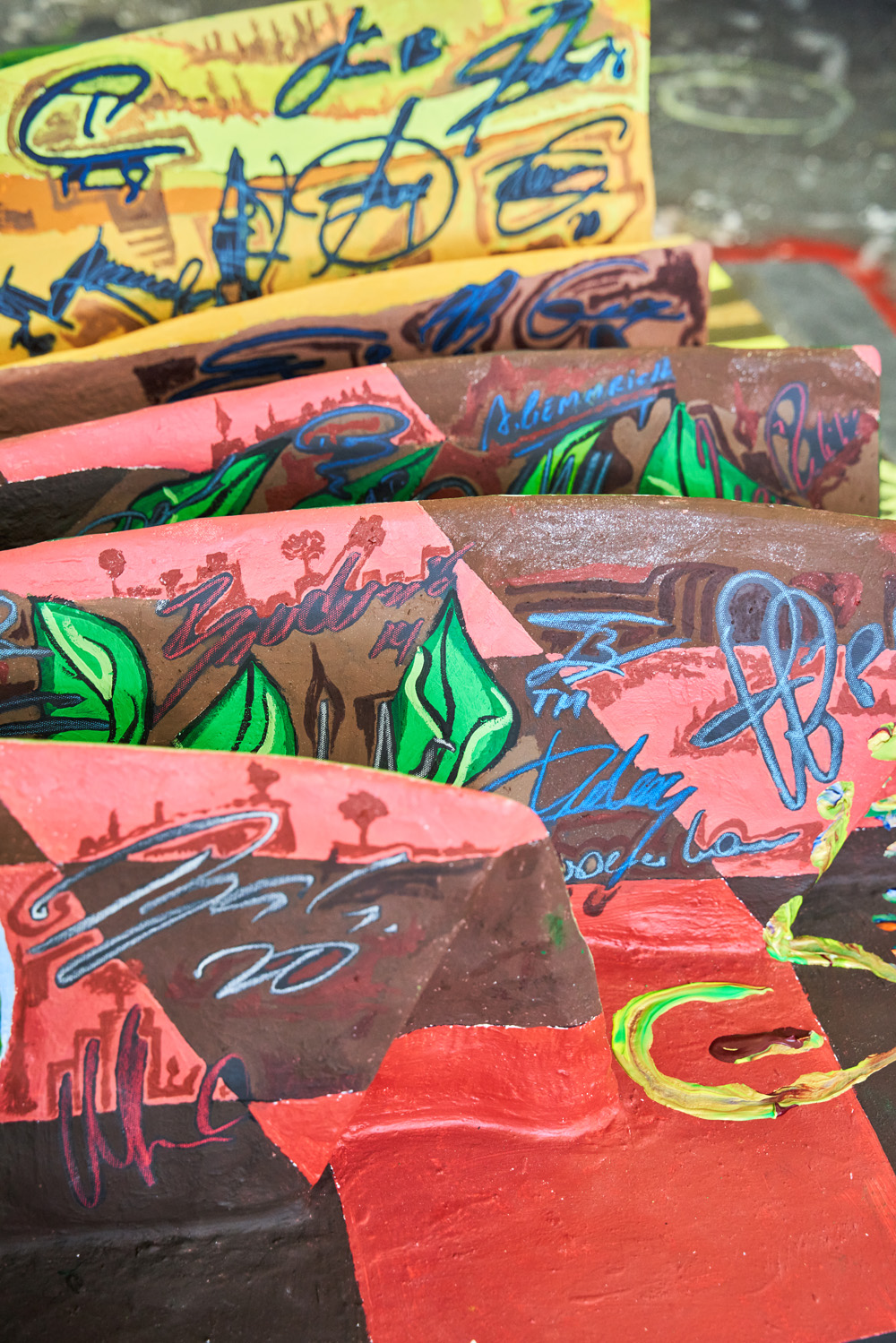 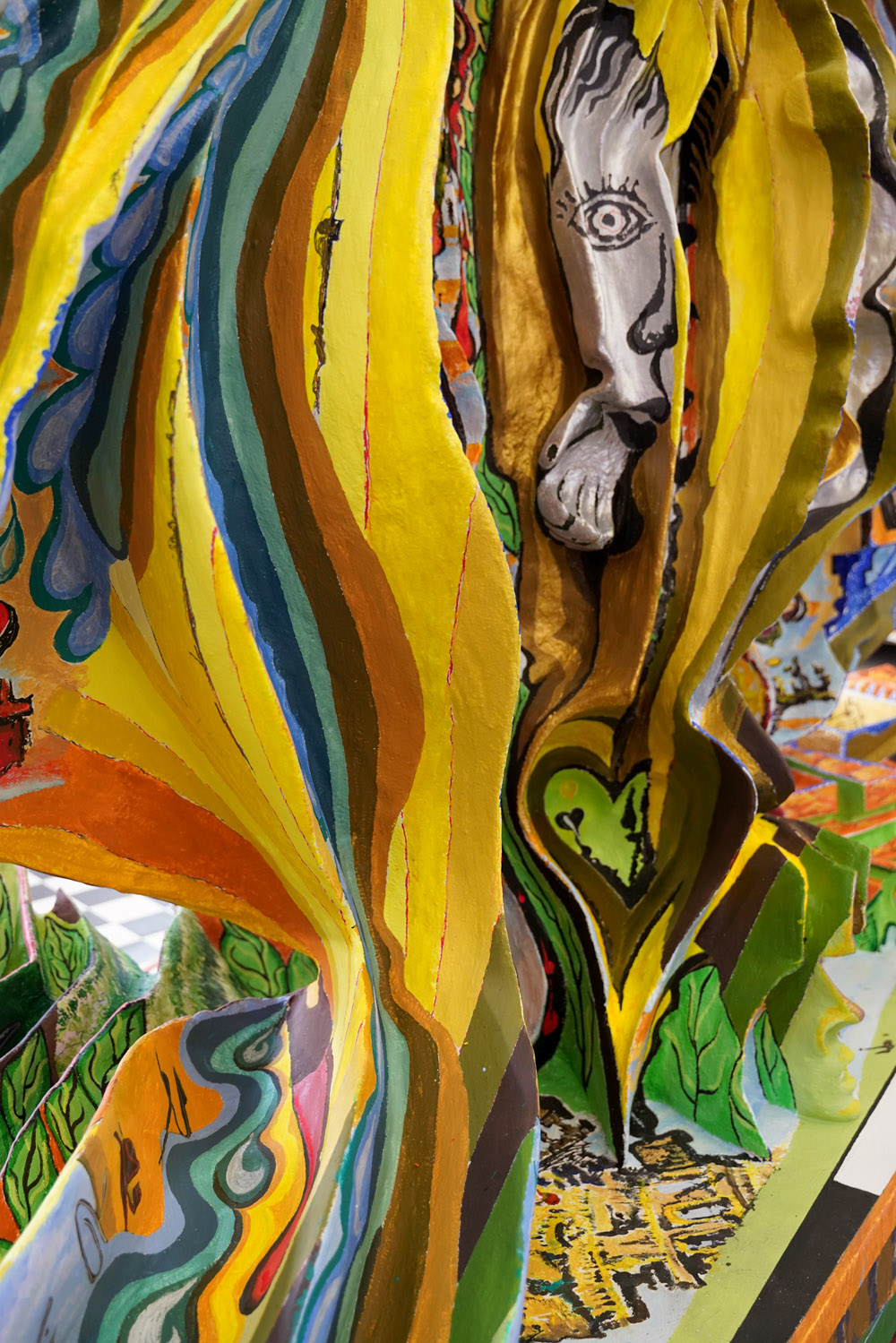 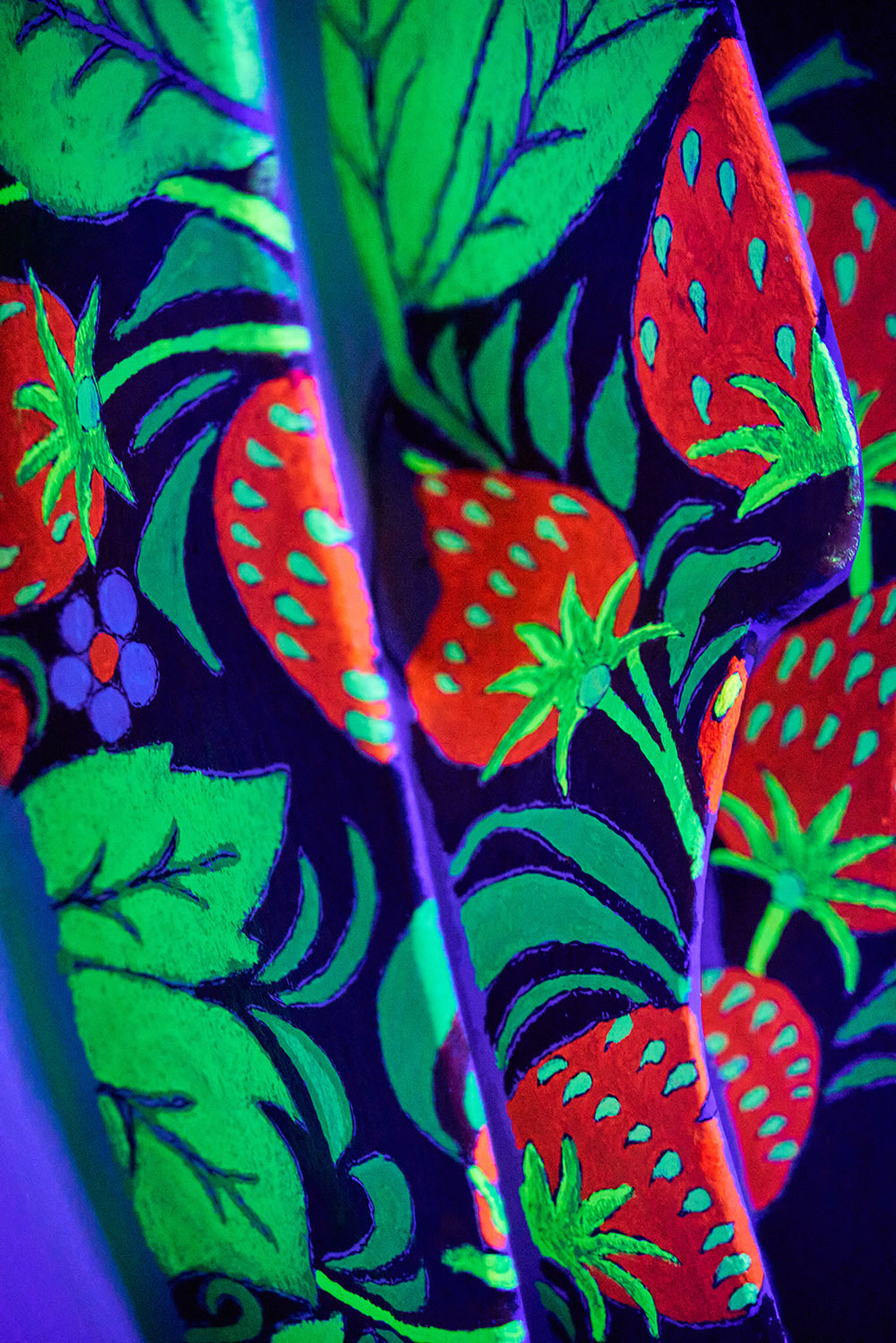 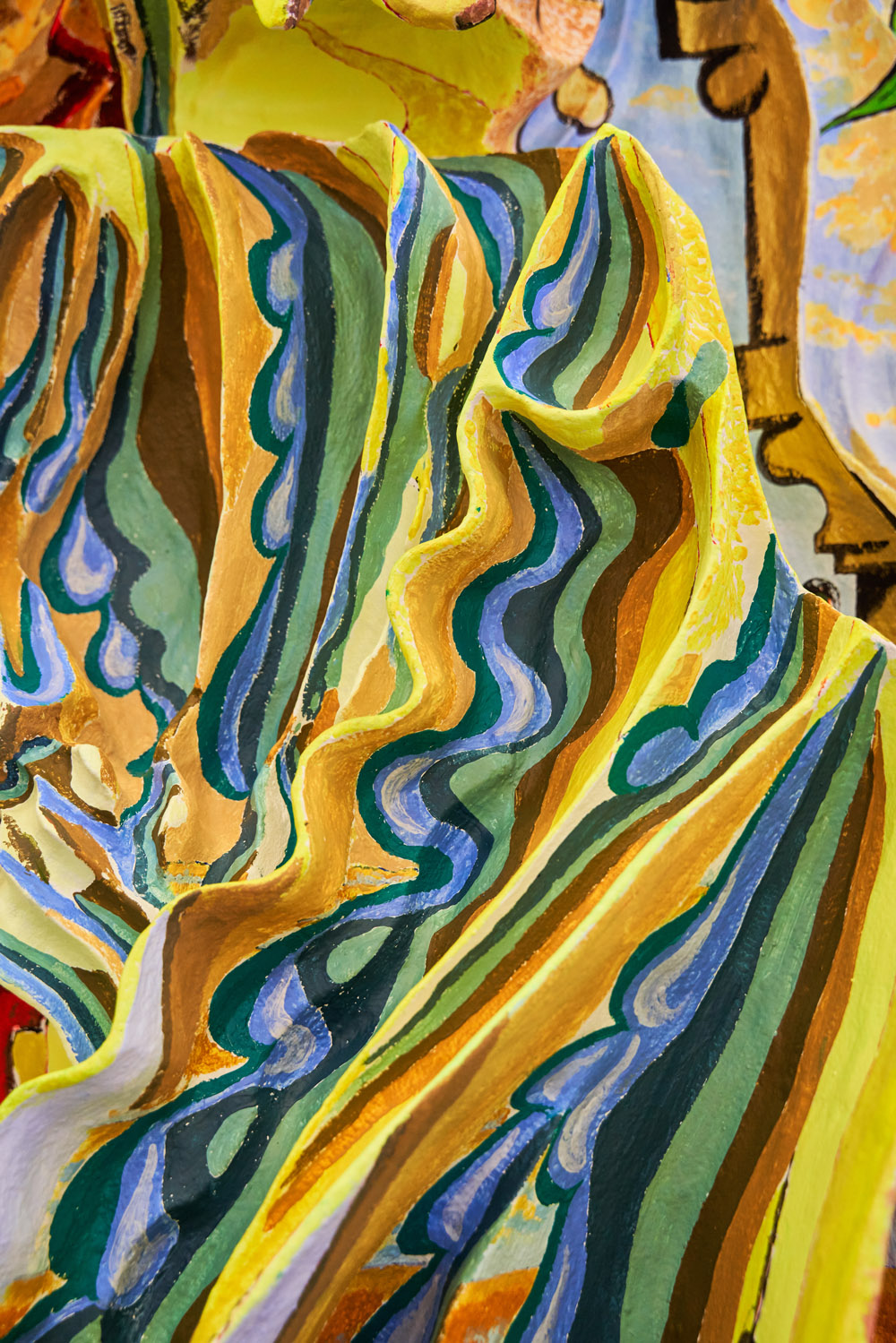