A Drop of Water

The football world championship of 2010 posed a number of challenges to David Pflugi that are unique in the history of the Victory Works Collection. For organizational and logistical reasons, he was unable to collect the signatures of his works on location in South Africa. He was therefore faced with the difficult task of collecting the signatures of all finalist players after the world championship had already been concluded.

Expending considerable effort to achieve this goal, he was ultimately successful in enlisting the support of the Royal Spanish Football Federation (Real Federación Española de Fútbol) and the Royal Dutch Football Association (Koninklijke Nederlandse Voetbalbond). This made it possible for him to gain access to the Spanish and Dutch national football teams during various occasions, where those players who had participated in the 2010 final in South Africa signed several sculptures, as well as a number of works on canvas. It is one of these canvases that forms the centerpiece of «A Drop of Water»; a complex relief has been constructed around it.

The process of gathering all required signatures required several journeys to locations including Madrid and Barcelona in Spain, as well as Noordwijk (near Amsterdam) and Enschede in the Netherlands, and Lausanne in Switzerland. A number of journeys were required specifically to collect the signatures of individual players who had already ended their careers. All signatures were present by the end of 2012, thus bringing this difficult process to a successful conclusion.

With signed canvases now in David’s possession, the work of creating the relief for «A Drop of Water» began in 2018, with most of the sculpting being completed in that year. This relief was then painstakingly painted, mostly during the years of 2019, 2020, and 2021, with final touches being added in early 2022.

Owing to the drawn-out process of its creation, this work showcases in one object the development of David Pflugi as an artist during an intensely creative and fruitful period, and his creative maturation over this period of time.

At the heart of «A Drop of Water» is a work on canvas, which shows a multitude of views of the first Victory Work to be created in honor of the 2010 football world championship, and was signed by all the finalist players of that year. This canvas work depicts the first sculpture to be created by David for the 2010 final, with different views of the object arranged into a shape suggesting the outline of the African continent; despite being intermixed with visual fragments of the work's other motifs, the features of the original 2010 sculpture remain readily discernible within the finished work.

This abstract representation of the African continent, along with the player signatures around it, forms the visual center of the object. From it emanates a series of concentric circles, like a highly stylized representation of the ripples caused by a single drop of water. There is the suggestion of an artistic statement here: A small thing can have great consequences. Marked by thin lines of gold, these concentric circles alternate between light and dark blue, hinting at both a daytime and night sky, and therefore the passage of time. At the extreme half of the right-hand side of the object's front view, a partially abstract running figure with many faces is hidden within the shape of the relief. This is a recurring motif in the works of David Pflugi, and is suggestive of a group of people united by a common goal, attempting to act as one.

The shapes of the ripples spreading out from the center of the object decay as they reach the outline of the relief, where the silhouette of the object takes on a more organic, complex shape, reminiscent of flowing liquid or perhaps the foliage of plants that are beginning to grow thanks to the life-giving powers of water. The organic and natural shapes which define this work contrast with the hints of a frame around the canvas centerpiece of the object, and the subtle shapes below it which appear to be holding it up, composed mainly of straight lines. These are the only shapes in the relief reminiscent of anything constructed artificially, shaped by a thinking mind and a human hand.

These visual hints fall into a greater context of meaning as one begins to move around the object from right to left. Like most of David Pflugi's works, «A Drop of Water» is painted with several anamorphic illusions, which reveal themselves only when viewed from specific perspectives; the object therefore changes its appearance with every step taken by its viewers.

Viewed from the right, the rippling water is no longer discernible. Instead, one is faced with a barren desert landscape, parched and seemingly lifeless, clearly in dire need of water. And yet, something – someone – must have lived here once: On a plinth, towering high above the landscape, stands the statue of a figure. It is vaguely human, and yet terribly mutated. Many faces and eyes grow out of its warped body, along with further organs and extremities, as if a community of people had, through some terrible disaster, melted into one. Only the head atop the figure appears fully human. Its face, drawn in simple black lines, appears to be looking directly at the viewer. This mutated figure is in some ways frightening, its appearance disconcerting and uncomfortable – and yet, it is not necessarily malevolent. The statue is hunched over, one arm reaching almost all the way around the painting, motioning towards the lifeless landscape as if in silent warning. Droplets of a green liquid are falling from the figure's hand onto the landscape below. The arm performing this motion is also heavily mutated, being heavily reminiscent of a female torso, with both breasts and buttocks incongruously on display from the same side, hinting at desire, temptation, perhaps seduction. Although this disconcerting scene covers the entirety of the object's right-hand view, most of the signatures of the 2010 finalist players remain clearly visible.

Within the desert landscape, a path in a chessboard pattern stretches into the distance, ending abruptly before it reaches the horizon. Where it leads is unclear. Its origin and purpose are left to the imagination of the viewer.

Moving on past the work, one revisits the frontal view of the object, now armed with greater knowledge about the context within which the ripples of water are placed. Continuing one's journey of discovery through the visual world of «A Drop of Water», one is very suddenly struck by the surprising and unexpected simplicity of the work's final motif. Viewed from the left, the object finally reveals itself to be perfectly round – it is a gigantic football, painted in plain black lines and gray dots, with some of the player signatures still visible. This is the only motif of the work that is not only simple, but also unambiguous in what it expresses.

In the spaces between these three main views, a rich variety of abstract visual episodes is displayed in rapid succession. Thanks to the use of signaling paint within the object, further details, hidden in daylight, are revealed when the work is illuminated using blacklight in an otherwise darkened space. 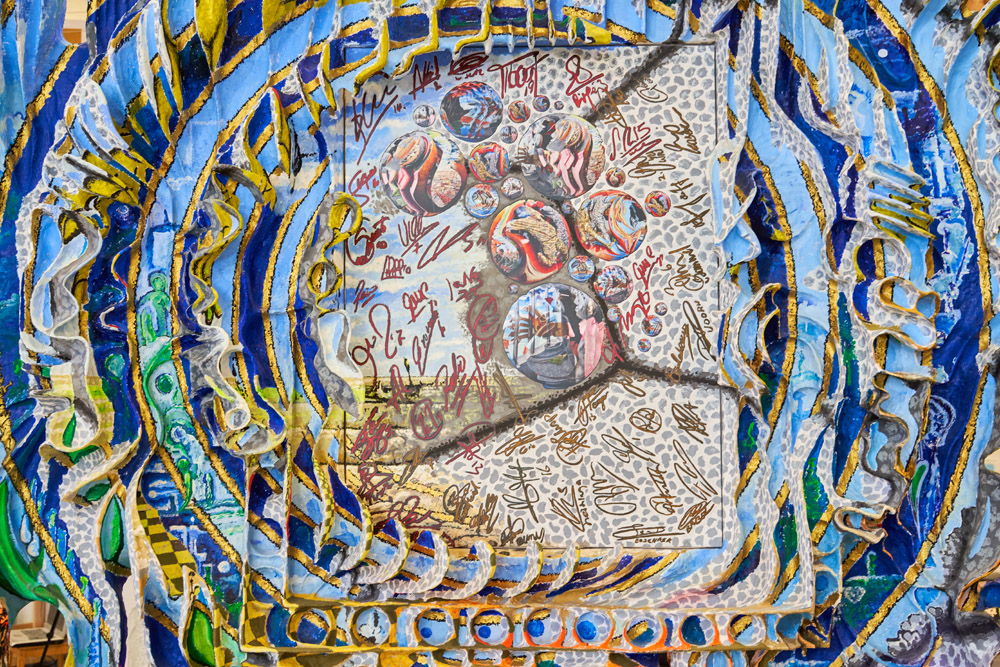 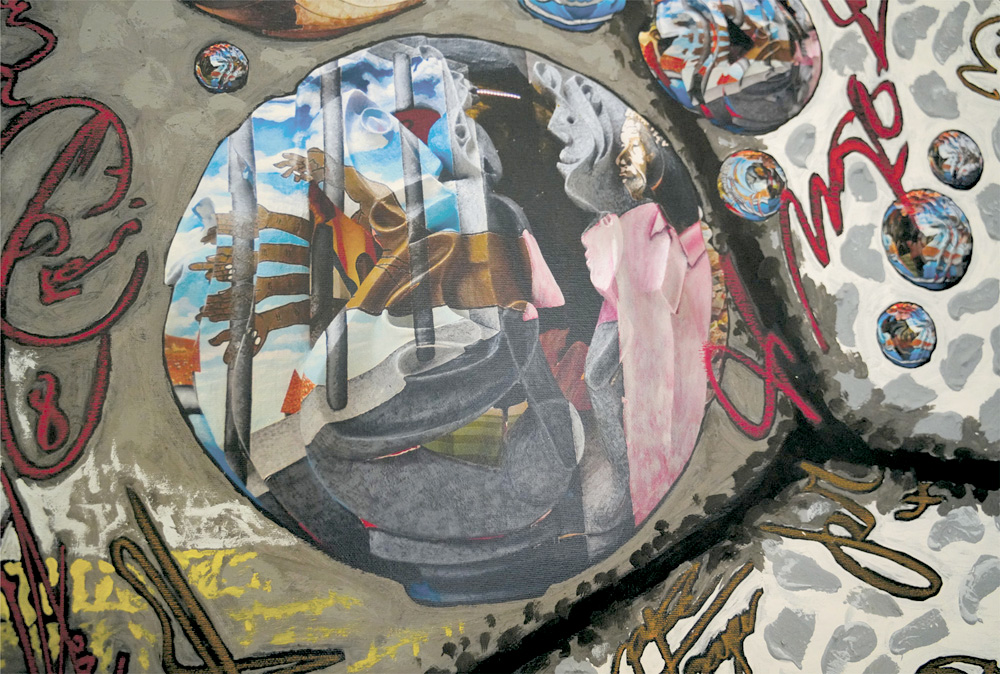 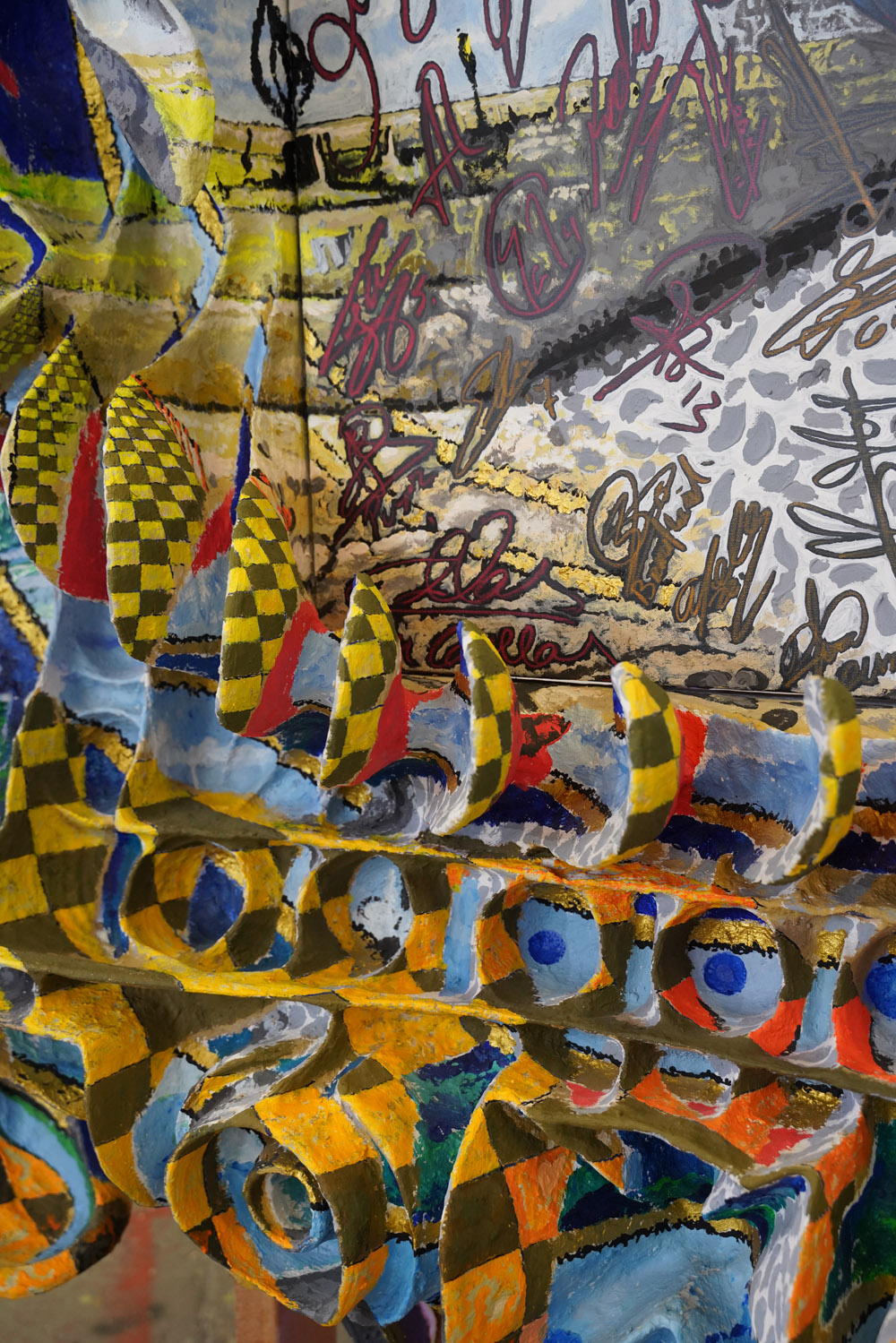 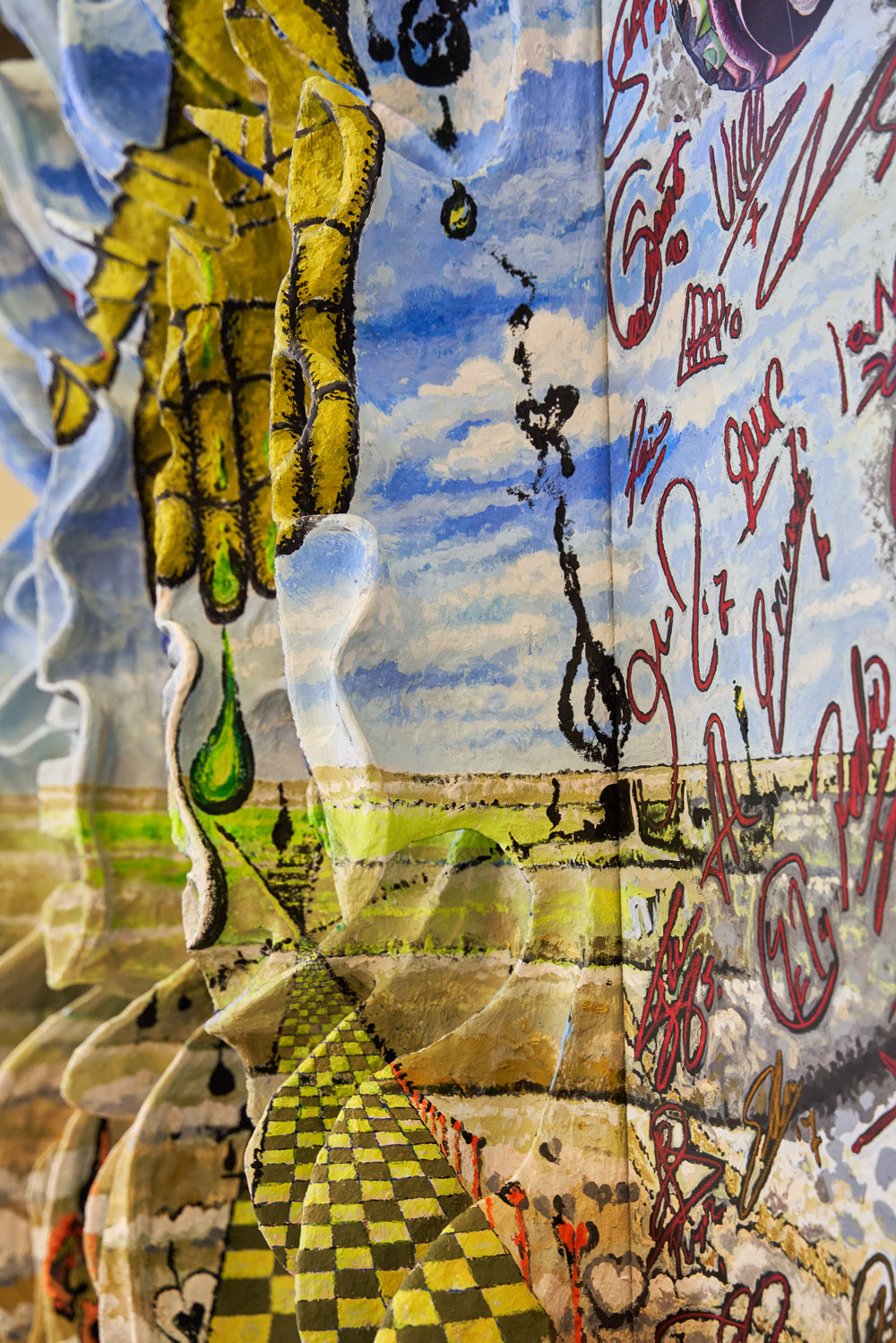